Looks like a chair, right? Oh, but think again, and then consult the rules on properly addressing modern furnishings on "Stuff White People Like:" "Referring to a white person’s expensive chair as a ‘chair’ is considered poor form and will likely result in a loss of trust and/or respect." Perhaps that's what American furniture producer Herman Miller had in mind when it devised a marketing scheme to lure the populace into submitting email info to the company's database with the promise of a hand-painted Eames rocker. Which begs the question: why was this piece in particular chosen and not, say, something else from Herman Miller's impressive inventory? Why does this chair hold such an exalted place within the genesis of midcentury furniture design? After the jump, a reasonably thorough exploration of the perch that's formally termed the "Eames Molded Plastic Rocker." Designed in 1948 by designer Charles Eames, the rocker originally consisted of fiberglass-reinforced plastic molded into a deep seat with a high backrest and birch or Maplewood rockers underfoot. One of the first products in Charles and wife Ray's line of mass-produced molded plastic chairs, it was crafted to distribute the sitter's weight and pressure comfortably. At the time of its release, the rocker was considered a practical alternative to the existing fiberglass Chaise and a far more colorful option than the Eameses' wooden models already on the market. Have a look at the Herman Miller order form from 1951: A few years later, it was among the crop of molded-plastic chairs that got the blessing of the New York Times as a model of efficient production: "The most revolutionary contribution of designers to home furnishings in the last century...is the molded chair," wrote Betty Pepis in "The Molded Chair," an article that ran on Jan. 5, 1955. "The ordinary chair, made of wood, is composed of as many as forty-two different pieces. The molded chair is often only made of only half a dozen pieces, thereby eliminating much of the labor formerly involved." Running alongside the text was this image: Despite the fact that Herman Miller ceased production of the rocker in 1968 (until they reintroduced it 30 years later) pregnant employees continued to receive the chair as a company gift until 1984, solidifying the rocker as a token of high-end nursery decor. A 2007 posting on the Apartment Therapy parenting site Ohdeedoh implored readers to answer the following: "Aesthetically we love the Eames Shell Chair Rocker, but I'm concerned that it won't be comfortable for me and the baby. Has anyone else used this for nursing and holding the baby?" The 19 comments range from "I really cannot imagine nursing in this rocker" to "I'm still looking for an excuse to buy an Eames rocker" to "I find it comfortable for nursing. The arm rests are at a perfect height for me." Also in 2007, interiors blog Design*Sponge ran a contest that asked readers to submit photos of spaces they deemed just perfect for a rocker. The prize? A rocker, of course. Here's one of the toniest submissions: 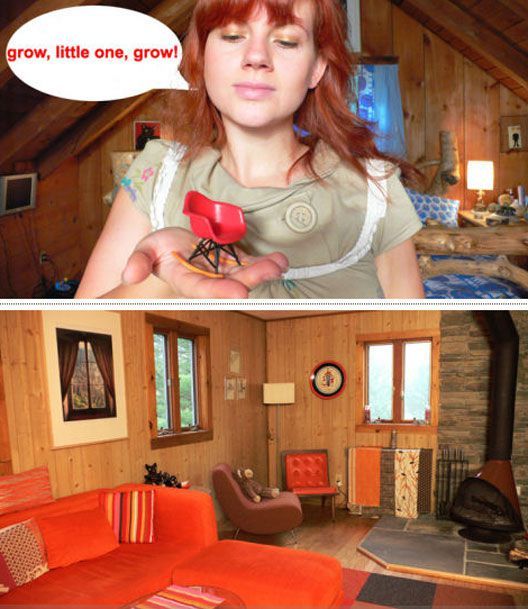 Today, the rocker adorns the San Francisco offices of Twitter: